November 1, 2021 Toni Boornazian Around The Park 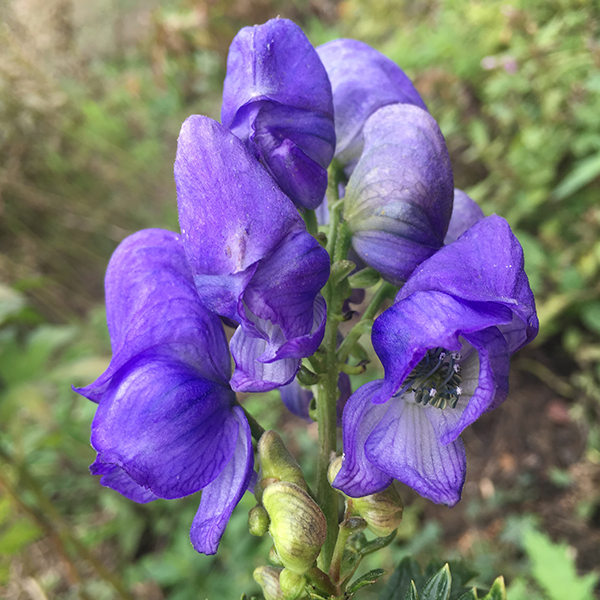 Monkshood, also known as aconitum, aconite, wolfsbane, and devil’s helmet, is a member of a genus of over 250 flowering plants in the Ranunculaceae family. These herbaceous perennial plants are native to the mountainous parts of North America, Europe, and Asia, and grow in mountain meadows in moisture retentive but well-drained soils. They prosper in full sun to partial shade in temperate climates and grow to two to four feet tall and one to two feet wide. The leaves of the plant are palmate, meaning they resemble hands with lobed “fingers” that often have toothed edges and vary in color from light to dark green. The two- to ten-petaled flowers come in shades of blue and purple. However, rare species of monkshood can have white, yellow, and even reddish pink flowers. The plants are not invasive and are moderately difficult to grow. Once planted, they do not take well to transplantation.

The name monkshood is derived from the helmet-shaped petal distinguishing each flower, which is called a galea, also deriving its name from a Roman helmet. The conical shape resembled the hoods worn by English monks. Other common names for monkshood, such as aconitum and wolfsbane, stem from the plants’ most popular trait: they are poisonous. The roots and tubers of monkshood are particularly toxic and contain aconitine and related alkaloids. When touched, numbness occurs. When ingested or absorbed into the skin, diarrhea, convulsions, ventricular arrhythmia, and other symptoms develop, eventually leading to death. 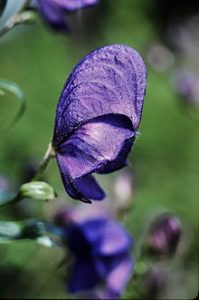 Poisons from the plant were used to coat weapons. The name aconitum derives from the Greek word for dart or javelin, the tips of which were poisoned with the substance. The Minaro in Ladakh used the poison on their arrows to hunt ibex, while the Ainu in Japan used it to hunt bears. In addition, the Aleuts of Alaska’s Aleutian Islands used the toxin on their harpoons to hunt whales. The Greek name lycoctonum, which translates literally to “wolfsbane,” refers to the practice of coating arrows with the poison to kill wolves. In Greek myth, wolfsbane originated from the toxic slobber of a three-headed dog named Cerberus, the fearsome canine guardian to the gates of Hell.

In addition to hunting, the poison was used for warfare, espionage, and protection, inspiring its inclusion in numerous facets of popular culture. For example, the 1931 film Dracula began the trend of associating wolfsbane with protection from vampires. It is only when Mina discards the wolfsbane from her room that Count Dracula is able to approach her. In the Harry Potter series, Remus Lupin, a tormented werewolf, drinks a potion of wolfsbane carefully concocted to control his transformations, inspired by the use of the plant in the Middle Ages to treat lycanthropy and deter wolves. In Game of Thrones, one of Tywin Lannister’s commanders is assassinated by a dart, identified as being coated with wolfsbane.

Despite the toxicity of monkshood, the plant still has medicinal properties. It can be used to reduce fever, as a topical anesthetic, and to treat neuralgia. However, the plant is no longer used for medicine because of the slim margin in determining the correct dosage. The risk of using too much outweighs potential benefit of the toxin.

A few monkshood plants can be found in Stuyvesant Square Park. They are best enjoyed from afar – even gardeners must use gloves when caring for them. Bees and butterflies, however, are immune to the toxins. Although spooky season is over, the plant will offer protection from any vampires and werewolves who may still be among us. 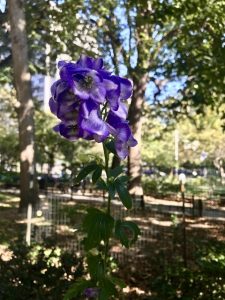 Your ticket for the: Monkshood