History of the Park 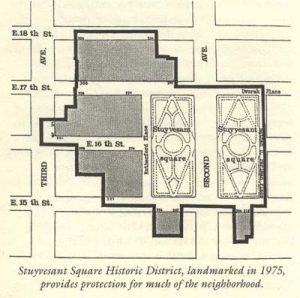 Stuyvesant Square Park, uniquely bisected by Second Avenue between East 15th and East 17th Streets in Manhattan, is the center of one of the most handsome and historic neighborhoods in New York City. It is named for Petrus (Peter) Stuyvesant, the last Director-General of the Dutch colony of New Netherlands.

“Old Silver Nails,” peg-legged and irascible, was evidently an efficient Director but not very popular among his constituency of proximately 1,500. His tenure, begun in 1647, ended in 1664 when it was his misfortune to be ordered to hand over his city to the British. Such was his reputation that a fleet of ships was sent to ensure that the accords reached far away in Europe would be honored peaceably.

The Director was a man of wealth and property. His farm, or “bouwerie” in Dutch, of some 120 acres extended from what is now East 10th Street to East 23rd Street, and from First Avenue to Fourth Avenue, Union Square East, and Park Avenue South. It was the a pastoral place of rolling meadows, woodlands, ponds, rocky hills, waterfalls, and streams – far removed from the settlement at the Battery. Indeed, the property bordered directly on the East River, in that distant time before extensive landfills reshaped Manhattan.

The Director’s manor house, surrounded by outbuildings for his many servants, was situated with a clear view of the river just west of the present intersection of Second Avenue and East 10th Street. Close by, the site of his chapel is marked today by St. Mark’s Church in-the-Bowery, and the famous Dutchman lies there still in the family vault.

During the 18th century, urban New York’s northward thrust steadily approached what was then “Petersfield”, so named by great-grandson Petrus S. Stuyvesant. In 1789, this enterprising namesake, much like any modern developer, mapped a portion of his inheritance into housing lots and proceeded to build.

His street plan was laid out in a true north-south direction, however, and the work was largely erased when, in 1811, the city adopted its own street grid to conform with Manhattan’s northwesterly bias. All was absorbed into the new plan except Stuyvesant Street, connecting to Bouwerie Road (Third Avenue) with St. Mark’s Church. Because of its beautiful houses and access to the church, the street was left as it was, and is today.

The Stuyvesant mansion stood on a river promontory roughly east of First Avenue between East 15th and East 16th Street, and city directories of the day list may members of his family living nearby. His daughter Elizabeth married Major Nicholas Fish, a distinguished Revolutionary officer, and live at 21 Stuyvesant Street.

SPNA’s By Laws can be found HERE.

Your ticket for the: History of the Park

History of the Park