December 20, 2021 Toni Boornazian Around The Park

Cardinals are birds in the Cardinalidae family found in the Americas and the Caribbean in woodlands, gardens, shrublands, and wetlands. They come in a variety of colors and are passerine, meaning their toes are designed to grab onto surfaces for perching. The family consists of 14 genuses, which together comprise 53 species. The Cardinalis genus specifically consists of three species – the Northern cardinal, Vermillion cardinal, and Pyrrhuloxia – all of which are found in the eastern United Sates, southeastern Canada, Mexico, Belize, and Guatemala. The Northern cardinal is the most common cardinal in New York. 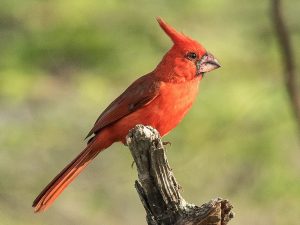 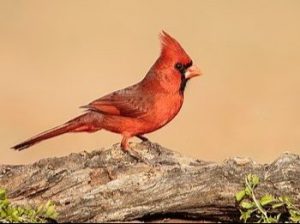 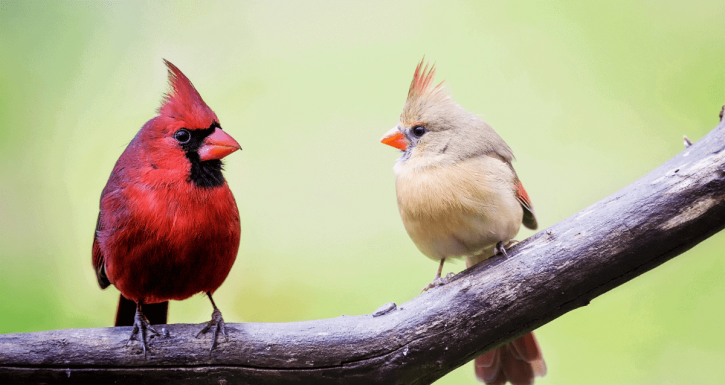 Both male and female cardinals are songbirds, and they will sing to each other for communication and for courtship. The songs are learned, meaning cardinals will sing songs similar to other cardinals around them. Male cardinals will sing their songs from a high perch to mark their territory and will chase after and fight other males. Both males and females are highly territorial, and will even fight their reflections in water, bumpers, windows, or other reflective surfaces, sometimes for many days, especially during breeding season. They also use their song to warn against predators – falcons, hawks, owls, and other birds of prey consume cardinals, and milk snakes, bluejays, squirrels, cats, chipmunks, and other animals consume cardinal eggs.

Cardinal couples are known for their devotion to one another. Male cardinals will woo female cardinals with their bright coloring, song, and by feeding them choice seeds and berries beak to beak. They generally mate for life and are monogamous, working together to raise chicks throughout the year. The female lays three to four eggs two to four times a year. The father raises and feeds the young while the mother incubates more eggs. Unlike many other birds, Northern cardinals are not migratory and will stay in the same area during their lifetimes. This means families stick together and form relationships with other cardinals around them. In order to keep warm during winter, cardinals will fluff their down feathers to trap warm air and alternate tucking their legs one at a time into their body while perching. 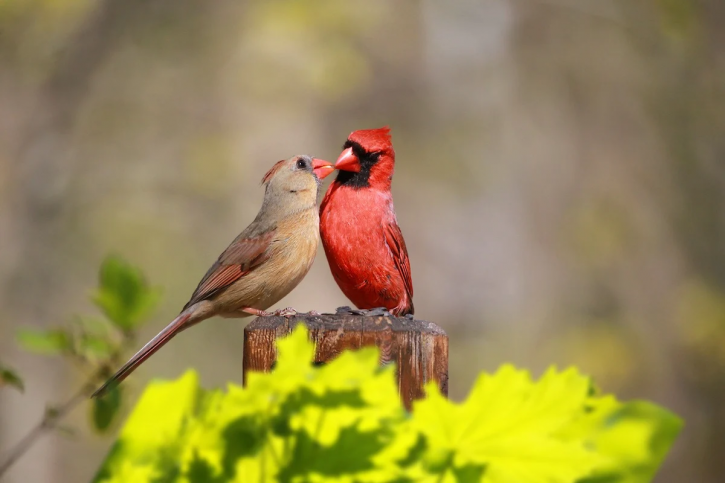 The relationship cardinal couples have with each other inspired cultures to associate devotion, romance, and friendship with the bird. For example, according to a Choctaw legend, a cardinal once came across a beautiful, lonely maiden looking for companionship. As the cardinal continued to travel, it came across a brave, handsome man. It befriended the man and tricked him into following it straight to the maiden’s home. The maiden and the boy met and quickly discovered friendship, companionship, and romance. The positive qualities associated with cardinals, their distinctive appearance, and their wide distribution contributed to their instatement as the state bird of seven U.S. states and as the mascot and namesake of a number of sports teams.

The Northern cardinal is one of our many neighbors who call Stuyvesant Square Park their home. They frequent our bird baths and are regulars at our bird feeders. Their devotion to each other is reminiscent of the vision we have for the Stuyvesant Square community – coming together to care for one another, cultivate relationships, and help ensure our park is the best it can be for everyone. You can find more information about Northern cardinals here.

Your ticket for the: Cardinals